Spirits to Dine For at the Dude Rancher Lodge! 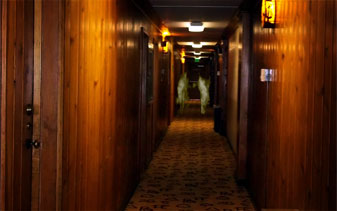 Are you fascinated by paranormal activity and anything that is extra scary? For example, hearing strange voices and footsteps, the clatter of pots and pans, noticing that objects have moved from their original places, all while staying in a dark hotel room? As featured on “More Haunted Montana,” the Dude Rancher Lodge provides this spooktacular experience for those that are interested in the paranormal world. Discover the deep, dark secrets that lie within the hotel during your stay for an ex-FEAR-ience that will last you for a long time!The Dude Rancher was built in 1950 by husband and wife, Percival and Annabelle Goan. With the tragic passing of Percival due to a car accident, Annabelle died years later due to her declining health. Since 1991, the lodge has been in the custody of Virginia Karlsen, and since then, the “Dude” has never been quite the same. The staff and guests of the hotel have reported paranormal activity, such as encountering the spirit of Annabelle Goan and having heard her voice in Room 226. According to many of the staff and hotel guests, rooms 224 and 223 were also affected by ghostly doings and strange occurrences. These unworldly and suspicious activities include the sound and sight of children’s footsteps on the hotel floor, the clattering of pots and pans, the way the TV turns on and off, equipment malfunctions and the flickering of lights.Due to the popularity of these ghostly rumors, the Montana Paranormal Research Society (MTPRS) investigated the Dude Rancher in December of 2009. Upon investigation, their EMF meters would strongly react toward the strange happenings during their visit. After experiencing fluctuation in temperature, sounds of someone moving around nearby, shuffling in the kitchen area and the feeling of cobwebs on their hands, the MTPRS decided that the activity is a factor of residual energies embedded in the bricks of the St. Vincent Hospital and Washington School that was used to build the hotel. But, is this the cause of all of the strange activity at the Dude Rancher Lodge? Or, could the hotel be haunted by the mournful spirits of those that had worked at the hotel when they were once the living? Experience the paranormal activity and solve the mysteries yourself with a visit to the Dude Rancher Lodge!For those that are interested in Billings MT hotel specials, you’re in for a great treat at the Dude Rancher Lodge when you book their Spirits to Dine For package! Now is the best and spookiest time to stay at the hotel, as it is popularly known as one of the most haunted places in Montana. The package is available on dates from October 1 through November 15, and the price starts at $150 per night. The Spirits to Dine For package includes special accommodation in one of the paranormal rooms, as mentioned in “More Haunted Montana.” To make your ghost adventures even more exciting, the hotel will provide one EMF meter, or ghost detector, per reservation to assist in your search for ghostly activity! But that’s not all, as the special also includes $25 worth of dining credit to use at the hotel and you will also receive your very own copy of the “More Haunted Montana” book. Don’t be a scaredy cat, book now and start your frightfully delightful adventure at one of the spookiest hotels in the state of Montana!